In 1977 a science fiction fantasy film was released to an unsuspecting public which would go on to not only change the movie business forever, but it would change merchandising as well. The film was called Star Wars and it began a billion dollar business that is still going strong to this day.

A company most known for Play-Doh prior to 1977, Kenner signed a deal with George Lucas to exclusively manufacture Star Wars toys for the first Star Wars film. Neither Kenner nor Lucas were ready for what happened after Star Wars was released.

The demand for Star Wars toys was massive. Unfortunately Kenner was not able to get product out in time for Christmas of that year and so what they ended up doing is some of the most risky yet brilliant marketing ever.
Instead of toys on shelves, Kenner had certificates that people could buy, called “Early Bird Certificates” which contained an order form to buy the first four Star Wars action figures which would be mailed out the following year.

Not knowing if this would work or not Kenner shipped out the certificates to stores and to everyone’s surprise it was a huge hit and Star Wars fans were pre-ordering action figures by the thousands. 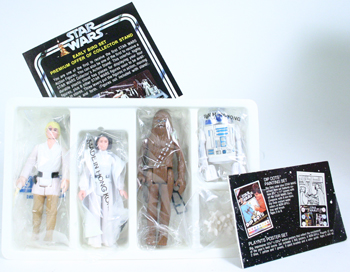 A few months later customers started receiving their early bird figures which included an action figure of Luke Skywalker, Princess Leia, R2-D2 and Chewbacca. This 4-pack of figures were the very first Star Wars toys to come from Kenner and began the most long-running and successful toy franchise of all time.

Kenner’s Star Wars toys started hitting shelves in early 1978 at major retails chains such as K-Mart and Toys R Us.

Unlike the early bird 4-pack, which came in a brown box with a white plastic tray, the retail versions of the Star Wars action figures came on cardbacks with photos of the characters from the film on the front and information about the different toys available at the time on the back.

The first run of Star Wars action figures were called 12-backs as they featured the first 12 action figures ever released from Kenner on the backs of the cards. Subsequent cardbacks are also identified by not only the number of action figures on the back of the card, but also by a corresponding letter which denotes any changes made to the cardback in terms of promotions, layouts or other variations to the design with each new wave.

The Star Wars line was a huge success and Kenner quickly established itself as one of the premiere toy companies in the world.

Prior to the release of the Star Wars sequel, The Empire Strikes Back, Lucasfilm had plans to air a Star Wars Holiday Special on primetime TV. This special would feature most of the returning cast but add a new character to the mix by way of animation.

The character was Boba Fett.

Regarded today as one of the most favorite of all Star Wars characters, Boba Fett started out as a super Stormtrooper with all-white armor. This idea was changed and Boba Fett became a Bounty Hunter as he is known in the saga and his armor changed to a variation of muted colors. His first appearance is in the animation portion of the Holiday Special where he acts friendly to C-3PO and R2-D2 but later reveals himself to be a bad guy. 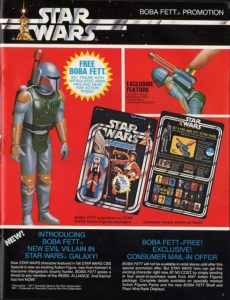 This new character was a chance for Kenner to create a new action figure of course and launch a new mail-a-way promotional campaign. Unlike the Early Bird Certificate promotion, the Boba Fett promotion required 5 proofs of purchase from any Kenner Star Wars toy. This meant parents had to buy multiple toys to get the proofs of purchase and order the Boba Fett figure which was only available at the time through the mail-a-way promotion.
What made the Boba Fett action figure special was the advertised rocket that shot out of his jetpack by way of a spring loaded mechanism. Unfortunately this was later removed before the figure was mailed out as a similarly functioning toy caused a child to choke on the plastic missile and die. The toy was a Battlestar Galactica ship made by Mattel.
To avoid potential problems with the rocket-firing Fett, Kenner changed the design so the rocket was firmly planted in the figure’s jetpack and the firing mechanism removed from the molds.
Since this change was very last minute, a letter was sent along with these non-rocket-firing Boba Fett action figures that allowed parents and kids to return the figure for their choice of any other Star Wars action figure.

To date there are only a handful of actual rocket-firing Boba Fett action figures that exist. Never released to the public, the existing rocket-firing Fetts are mostly test shots and marketing tools. They are some of the most highly sought after Star Wars collectibles and fetch extremely high prices when they do come up for sale.

After the Star Wars Holiday Special, Kenner set its sights on The Empire Strikes Back. The upcoming sequel would allow them to create brand new toys based on the characters, ships and locations in the film and re-release the first run of toys in Empire-branded packaging. 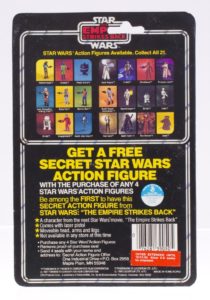 Like the Boba Fett Mail-A-Way offer, Kenner offered a Secret Star Wars Action Figure as a Mail-A-Way also. The figure’s identity was not revealed both as a way to create demand and also due to Lucasfilm not wanting to spoil the movie.
The offer was first available in 1979 and appeared on the 21g cardbacks, the final of the first Star Wars line. The cardbacks are called 21g as they have stickers placed over the original 21f cardbacks lower portion to promote the secret action figure mail-a-way offer.
The secret figure was Bossk, a reptilian Bounty Hunter that only has a few minutes of actual screen time. This was the first Empire Strikes Back toy to be released to the public and the only new toy fans would see on shelves until the second wave of Empire toys.

The first wave consisted of all 21 action figures from the original Star Wars line. The only difference is they were place on Empire branded cardbacks instead of Star Wars cardbacks. These toys came out just prior to the release of Empire and had the same mail-a-way promo offer, only this time it was part of the cardback and not a sticker slapped over an existing cardback.

It wasn’t until after the film’s release that Kenner began releasing actual toys from the new film.