As the title states here is a list of 10 people who have had cameos and guest appearances in Star Wars. From bit parts to voiceovers, these 10 people you may not have even known were part of the Star Wars Universe. 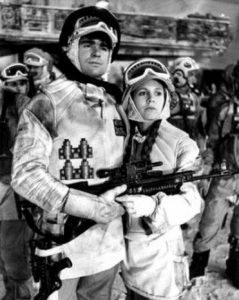 Probably best known for his portrayal as George Berger in the musical film Hair and as Dr. Andrew “Andy” Brown in the television series Everwood, Treat Williams is one of those actors who has repeatedly popped up in many well known films and television shows over the years.

It just so happens this memorable actor played a Rebel Soldier on Hoth in The Empire Strikes Back.
The photo to the left shows him with Princess Leia herself, Carrie Fisher on the set of the Star Wars sequel back in 1979.

An interview Williams did with Broadway World in 2012 has him talking about the experience:

TW: I’ll tell you the story: I went over to London and I was visiting Carrie [Fisher]. She said, “Wouldn’t it be fun to run through a shot?” And, I said, “Sure. All right.” And, she said, “We’ll dress you up and you’ll run through the soundstage a couple of times and that’ll be it – it’ll be fun.” So, I dressed up like one of these… I don’t know; what are they called?

TW: Thank you very much – Echo Base Troopers. [Laughs.] So, we run through the shot and then they say, “OK, we’re gonna do this about twelve more times.” So, I ended up being an extra – which was good for me to find out what that was like, if only for half a day – and then I didn’t mention it for like fifteen years after that. Then, once I did in some interview a few years ago, all of a sudden I got more fan mail than I ever have in my entire life! I mean, people sent little dolls and little paratroopers – they still do! It’s crazy. [Laughs.] 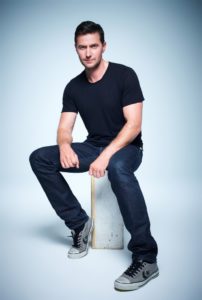 Best known internationally for his role as Thorin Oakenshield in Peter Jackson’s The Hobbit, Richard Armitage had a very small role in The Phantom Menace during his final year at drama school where a notice was posted that said they were looking for tall men to play fighter pilots. The role is an unnamed Naboo fighter pilot and from what Armitage has stated in interviews his voice was changed to a robot voice and his scenes actually cut and altered digitally.

“I got incredibly nervous on the set and delivered my one line very carefully. I wondered why the crew were looking at me strangely, but when I watched the film, I realized my voice was completely computerized. I’m in one of those blooming white outfits with my face covered up.”

“I kept embarrassing myself because I kept bumping into her double, who looked a lot like her and thinking it was Natalie. I’d be like ‘Hi Natalie, how are you’ – and she’d be looking at me blankly.” 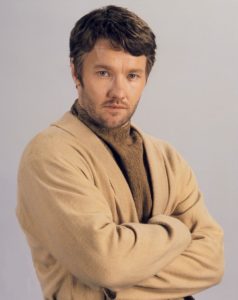 At this point most people recognize Joel Edgerton’s face as he has become a well-known and popular actor appearing in movies such as Zero Dark Thirty, Warrior, Black Mass and The Great Gatsby – but prior to all of that he appeared in both Attack of the Clones and Revenge of the Sith as none other than Owen Lars – Luke Skywalker‘s Uncle.

In 2002 Edgerton revealed in an interview with FilmInk; “I owe a lot to the fact that I passed as a young version of Phil Brown. It wasn’t until someone posted a picture of me on the internet next to a photo of him that I went, ‘Fuck!’”

Edgerton has since expressed his desire to reprise his role as Owen Lars by being a part of the Kenobi spin-off film that Ewan McGregor has shown an interest in doing. Edgerton has also approached Lucasfilm about playing a different character in the Star Wars Universe – even Boba Fett: “I’ll just never take off the mask.” 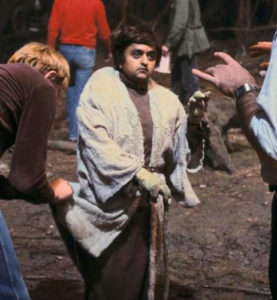 Most will recognize him from the Tim Burton remake of Charlie and the Chocolate Factory as the Oompa Loompas, and those of us who are older will also remember him from the fantasy classic, The Neverending Story.

Due to his small stature he has been cast in odd roles in comedy, horror, sci-fi and fantasy films his entire career. In addition to acting he is also a stuntman, puppeteer and comedian.
He has appeared on TV shows such as The X-Files and East Bound and Down and in films like Star Trek: Beyond and Planet of the Apes. He is also known for his role as Mr. Soggybottom in Tim Burton’s Big Fish.

But Deep Roy has been a part of the Star Wars Universe since The Empire Strikes Back performing as Jedi Master Yoda when a puppet couldn’t be used for the walking scenes. He was also Droopy McCool, the horn player for the Max Reebo Band who performed at Jabba the Hutt‘s Palace in Return of the Jedi and also played one of the Ewoks on Endor. 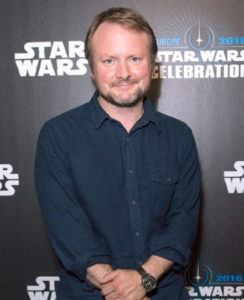 That’s right, The Last Jedi writer/director has joined the ranks of those who have appeared on-screen in a Star Wars movie. Johnson visited the set of Rogue One during production and is now forever immortalized as a Death Star gunner. In an interview with ComicBook.com Johnson proclaimed he was the one “pulling the lever”.

Johnson and Rogue One director Gareth Edwards apparently swapped cameos it seems as Edwards will be making a cameo in The Last Jedi.

Rian Johnson has written and directed several films including his Sundance break-out, Brick. He also wrote & directed Looper – a sci-fi time travel drama starring Bruce Willis and Joseph Gordon-Levitt and directed some of the most memorable episodes of AMC’s Breaking Bad including ‘Fly’, ‘Fifty-One’ and ‘Ozymandias’. 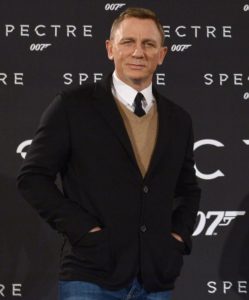 As most of you know by now, James Bond himself, Daniel Craig made a cameo appearance in The Force Awakens as a First Order Stormtrooper. While you don’t see his face you do hear his voice as he is the Stormtrooper whom Daisy Ridley‘s character Rey uses a Jedi Mind trick on to make him remove her restraints and drop his weapon on the way out the door.

Before The Force Awakens was released Simon Pegg mentioned he heard Craig would be in the film. Craig downplayed the comment/rumor claiming he was not in the movie at all and that he would never do such a small role. Abrams also lied about Craig’s appearance in the film as a soft ruse towards fan speculation. Once the film was released of course everyone acknowledged Craig’s part in the movie.

How the cameo came about was through 2nd Assistant Director Ben Dixon, a long-time friend of Craig’s who happened to be working on The Force Awakens which was shooting at Pinewood Studios where the latest Bond film was slated for shooting soon after. Craig asked if he could be in the film and after talking to J.J. Abrams, Dixon asked him if he would like to play a Stormtrooper in a scene they were shooting later that week. Obviously Craig jumped at the chance and is now a part of Star Wars history. 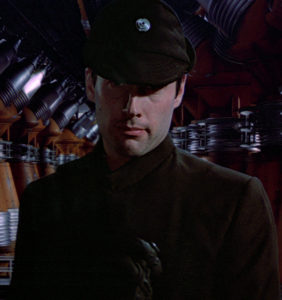 While hardcore fans are very familiar with his name, most people aren’t aware that Ben Burtt is the man responsible for the classic Star Wars sound f/x that have become synonymous with the franchise including the hum and swish of Lightsabers, Chewbacca‘s growls, grunts and howls, the screeching of TIE Fighters, the Ewok language, Darth Vader‘s breathing and R2-D2‘s chirps and whistles.

As an Academy Award winning sound designer Burtt has worked on some of the biggest films of the past 40 years including Star Wars, Indiana Jones, E.T., Star Trek, Super 8, Wall-E and others. He was instrumental in constructing the sounds of Star Wars since the beginning and continued to work on the films all the way through the prequels, all of which he edited. He also was instrumental in DROIDS, the 80’s Star Wars cartoon following the exploits of C-3PO and R2-D2.

Burtt’s Star Wars cameos include an Imperial Officer in Return of the Jedi who gets knocked off a gangplank in the Imperial bunker on Endor and in The Phantom Menace he portrays a Naboo Courier standing behind Queen Amidala when she congratulates Senator Palpatine on his victory as Supreme Chancellor. He has also voiced additional minor characters throughout the Star Wars saga and was the voice of Wall-E. 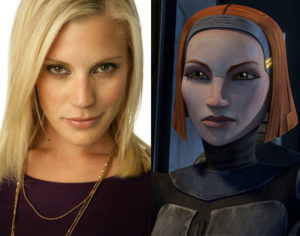 Known for a variety of roles over the years, Katee Sackhoff is no stranger to sci-fi having portrayed Kara “Starbuck” Thrace on the modern Battlestar Galactica series on SyFy, starred opposite Vin Diesel in the film Riddick and as herself in The Big Bang Theory. She is currently starring in the Netflix series Longmire and the CW series The Flash.

Sackhoff joined the Star Wars Universe as the voice of Mandalorian Bo-Katan, a character in The Clone Wars series she has recently portrayed once again for the Star Wars Rebels series on Disney XD.

In an interview with SyFy.com when asked about her voice-over work Sackhoff had this to say about her Star Wars role: “I’m lucky enough that when the powers that be over at Star Wars were wondering who the voice of the first female Mandalorian warrior [should be], they said, “Katee Sackhoff!”” 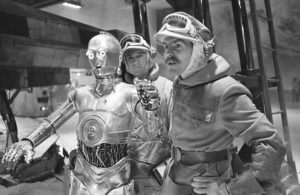 To kids today he’s more recognized by his voice in Pixar animated movies such as Toy Story, Wall-E, Cars, Inside Out and many others. To those of us growing up in the 80’s he was best known as the know-it-all mailman at the bar in Boston known as Cheers. But to hardcore Star Wars fans John Ratzenberger is better known as Major Derlin from the Battle of Hoth.

In an interview with StarWars.com Ratzenberger recounts one of his defining moments from working on The Empire Strikes Back: 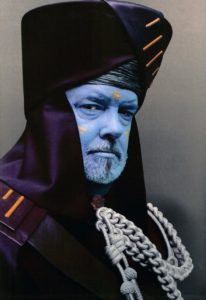 Of all the cameos in the Star Wars Universe, one of the most notable has to be George Lucas‘ in Revenge of the Sith. Not because it’s a memorable character or even a scene you would remember off the top of your head, but because it’s the one and only time the creator of Star Wars is seen on-screen as a character in his own Universe.

As Baron Notluwiski Papanoida, Lucas is only briefly seen on Coruscant when Anakin Skywalker rushes in to meet with Palpatine at an intergalactic opera. Lucas’ character can be seen for just a second or two and he is joined by his daughter Katie Lucas who plays the character’s daughter, Chi Eekway Papanoida.

In an LA Times article Lucas talked about the cameo and why he chose to do it: “My appearance in Episode III was just for fun,” he said. “Mostly I did it for my kids. I was wrapping the series, and I’d never been on screen in a Star Wars film, even though I’d been making them for decades.”

Lucas’ character returned for the animated The Clone Wars series. While the character’s likeness resembled Lucas, the voice was not his.